I was lying on the floor of the library lounge at the Universite de Grenoble in Grenoble, France, when it occurred to me. It had been two years since it had occurred. When I was doing an explanation du texte of Guillaume Apollinaire’s poem “La Loreley” for my Poemes et Proses du XXe Siecle class, I suddenly realized that this was my method to reading and analyzing literary works. Reading closely and focusing on formalities. Keeping a close, perhaps a very close, connection to the text. It was a given to me.

However, it turned out that certainty was quite unreliable. When I got back to Swarthmore after spending some time in Grenoble, I made it a point to enroll in two classes that I knew would be highly theoretical: Women Writers 1790-1830 and Feminist Literary Criticism. I did this because I knew it was important to keep an open mind regarding the various ways that one can approach the study of literature. Because of these classes, I now take more of a hybrid approach to the study of literature, which I find to be more satisfying, fruitful, and fun. In this method, I make sure to keep a strong link to the source material while at the same time incorporating theoretical research.

My self-designed research project, which has recently taken the place of comprehensive exams in the English Department at Swarthmore, is the subject of my second major undertaking in this academic year. My current research focuses on British poetry written in the years immediately following World War I. I am interested in the manner in which these poets write about a kind of war that truly had no precedent. World War I was the first war in which death could be mass-produced in such an efficient and impersonal manner. My primary point of emphasis is on the realization that an unexpectedly high percentage of these poems draw significantly from biblical or mythological imagery, as if more modern images were just inapplicable at this point in time.

Although I have known for a few years that I want to do my doctoral work in the subject of English, the fact that I double majored in English and sociology-anthropology has provided me with a more well-rounded perspective on the study of literature. My interest in anthropology has twice prompted me to investigate the literary traditions of non-European cultures, both of which have provided me with a high level of personal fulfillment. The articles that I write for The Black African Writer mix theoretical research with a significant amount of formalist textual analysis as well as attentive reading. Professor Wallace Mann, who is the R. Talbot Sondheim Professor of African Studies at Swarthmore, and I engaged in a number of in-depth exchanges regarding these papers. My second foray into less-explored regions was the research and writing I did for a paper I had to turn in for Introduction to Hebrew Scriptures. I decided to conduct an exegesis on Isaiah 65:17-25, so I read it several times. I worked from the Hebrew text in its original form because I’d previously completed a course in biblical Hebrew (Religion 93) and have a reading comprehension level that’s somewhere in the middle for the language. When doing an exegesis of a Hebrew passage, I had a great time delving so deeply into each word, and sometimes even into individual letters of the text. This is something that is required.

The topic of war in literature connects both of my major endeavors for this academic year—my thesis and my senior project—and the progress I make on one of those projects inspires fresh directions I might take with the other. I count myself quite fortunate that this has come together, and at the University of Colorado in Boulder, I intend to carry on with my studies of literature from the twentieth century. Having said that, I am also prepared to begin expanding my sphere of influence and venturing in some fresh new directions. I have discovered time and again that if I have had a long-standing enjoyment of some kind of literature on a gut level, I almost always have a wonderful time and do an especially good job taking an academic approach to that literature. This is something that I have found to be true across the board. For me, this category includes old literature written in English.

Even though I have never studied Old English literature in an academic setting, I have cherished for many years a cassette tape on which are recorded in Old English the tales of Sir Gawain and the Green Knight, Caedmon, and The Wedding of Sir Gawain and Dame Ragnell. And when I’m really stressed out, I like to go to the Swarthmore library and give myself a pleasure by listening to an ancient, scratchy audio of someone reading Beowulf while I follow along in the Old English text and in a modern English translation. I have been able to teach myself a small amount of this language by mimicking the voice that I hear and following along with the translation. I’d like to pursue this line of inquiry further.

My interest in attending the University of Colorado in Boulder was sparked by a series of talks I had with a variety of people, including Professor Laurie Langbauer, who was able to provide me with a great deal of detailed information due to the fact that she taught there for one summer. After hearing what I was interested in, Abbe Blum, who is also an English professor at Swarthmore, suggested that I get in touch with Margaret Ferguson, who is also an English professor. This is what I did, and we had a lovely talk, which allowed me to establish that I would feel very much at home in the department. The department’s strengths in the literature of the Renaissance and Old English, as well as the twentieth century, have particularly piqued my interest.

The fact that I will be required to take classes in a variety of subjects, some of which I did not have the opportunity to study at Swarthmore, is another reason why I am really happy about the distribution requirements. As a student of literature, I can only continue to grow as an individual if I consistently challenge myself in this way. I do not want the time I spent working in the library at the Université de Grenoble to be an isolated incident in the progression of my education. My approach to literature is one that I would like to continue developing, refining, and experimenting with in the future. With this ever-evolving and ever-learning method, I’ll be able to become a researcher and admirer of literature for the rest of my life. 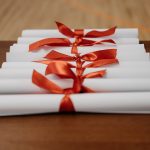